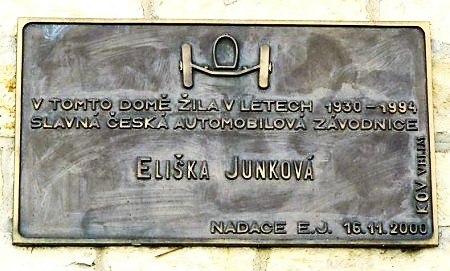 Eliška Junková (16 November 1900 – 5 January 1994), born Alžběta Pospíšilová and also known as Elisabeth Junek, was a Czechoslovak automobile racer. She is regarded as one of the greatest female drivers in Grand Prix motor racing history, and is the first woman to win a Grand Prix event. Eliška Junková lived from the 1928 until her death in the building of the Swedish Embassy, from where is one of the most beautiful views at the city. The Queen of the steering wheel” reminds until today the memorial plague on the building of the Embassy (Úvoz 13/156, Praha 1 –Hradčany).